So, for the past two months I’ve received several questions with regards to my weight loss journey. I’ve decided to write a blog post on it and share my truth wholesomely, because it has not been an easy ride whatsoever. First of all, to everyone who has said I’m on drugs, I’ve had surgery or I HAVE an eating disorder, peace be with you. That could have easily been the case, it’s been a rocky two years, but here’s the full truth. 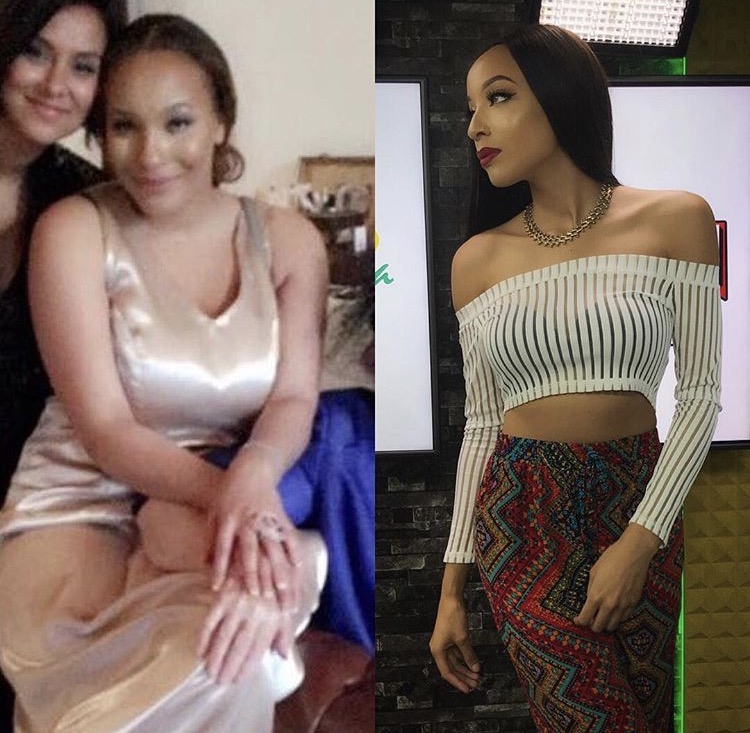 In 2016, I started putting on a lot of weight. I had just overcome a huge knock in my life and I fell into depression. I was a comfort eater, so I started “losing myself” and I stopped watching my diet. I noticed myself putting on weight, but I didn’t notice how much. I lived in the UK at the time and I’d come home for the holidays to comments from people around me saying that I’ve put on weight (thank you, I know), I’m chubby or literally saying “Laila, what has happened to you?” – I had to hold my head up knowing that by body had changed and not only was it obvious to me, but everyone around me. My clothes started getting tight on me, I found myself shopping in sizes much bigger than my original size and I didn’t know how to handle the situation. My mental state was puzzled, not only because I was battling depression but because one flaw that I have is impatience and I wanted the quickest solution to my problem. I remember ordering a ten day crash diet kit online, drinking aloe vera twice a day, eating about three spoons of food a day, going on vegan diets to lose inches on my waist and a lot more. I started to suffer myself because I wanted to hear someone say “Laila, you’ve lost weight!” – I thought that that was what I needed, but it wasn’t. What I needed was to overcome my depression and it took my health being at risk for me to realise.

Now most people don’t know this, but I have a slightly prolapsed disc and torn ligaments in my back. It’s a permanent injury that I have to live with unfortunately, but it can be maintained. There are random moments that come and go with back pain ranging from mild to severe, but I had developed a mental block towards exercise after the injury as I didn’t want to inflict pain on myself. Most people were surprised, Laila had always been sporty. After all she was in love with netball, she was also a great athlete who even came second at Regionals for 200 metres. People couldn’t wrap their heads around it, but I felt no need to tell everyone why I had stopped exercising. It was a mental block that I had to overcome from within and I didn’t believe that it was anyone’s concern. I ignored the severities of not getting exercise until I started getting horrible pains in my breasts. I didn’t know what to do and I was scared based on the fact that breast cancer runs in my family to a certain extent. I confided in my aunty, who is nothing less than a second mother to me and we went to the clinic together. I can vividly remember the doctor touching my breasts and saying “Yes, I think there’s a lump here…hmmm…” – I completely froze and automatically, I thought the worst. I was of genuine belief that I had breast cancer and I was transferred to a specialist at a bigger hospital.

Two weeks later, I went for my appointment at the hospital and the doctor ran all the scans that she needed to. As she came back in to the room, my heart sunk because I thought I was going to hear “Laila, I’m sorry, you have breast cancer”, but instead, she said: “The good news is, you don’t have breast cancer, however, I think we need to have a chat.” – I was relieved, but I was still in a state of shock. I sat down with the doctor and she told me that sometimes as women, we ignore breast pains but they’re actually very common and getting breast pains is just like getting period pains. She looked at me and said “I think you need to lose some weight.” – As shocked as I still was that I didn’t have cancer, I also knew that enough had become enough and it was time for me to work on myself and my health. I knew that I couldn’t continue to live as I was living and a major change had to occur. From that day, I literally FORCED myself to overcome my mental state by seeing happiness as a choice and working towards a happier life.

I’d be lying if I said I started gyming immediately, but I did pay a lot of attention to my diet. I tried to focus on healthy carbs, high fruit and vegetable intake and moderate protein intake. I also made it fun for myself by setting challenges and switching up my diet. I made an effort to eat healthier and more importantly, eat in moderation. The healthy eating part wasn’t hard as I’ve always loved healthy food. My mum actually said that when I was younger I used to snack on raw broccoli and raw mushrooms…don’t judge me! But the moderation part was the issue. However, although the first few days were hard, the process got easier and easier by the day and eventually, I was able to sustain myself on two balanced meals a day and my body gradually started reshaping itself again. I wasn’t losing weight as quickly as I’d wanted to by the way, because I still hadn’t started gyming again and I was still struggling to overcome the mental block that I was experiencing (and still am). But unfortunately, towards the end of last year and within the first two months of 2018, I was in an emotionally destructive relationship that threw me straight back in to a depressed state of mind. I was with a guy who I later found out had another girlfriend at the same time of me (funnily enough, her and I are really close now because men are trash) and even though I’d never met her, I thought I wasn’t good enough because of how I looked. I just imagined that she was slimmer than me, prettier than me and the usual thoughts that we often get with rejection. Based on that, I started to crash diet again. For about five weeks I found myself eating about half a meal a day or sometimes even less and the worst part is, I didn’t realise that I’d picked up an eating disorder. I only became conscious of how much weight I’d lost based on the expressions of other people and I realised that once again, I needed to help myself.

I got out of the relationship after months of emotional trauma and I decided that with opening a new chapter, I’d focus on me, myself and I. Based on that, I started to increase my daily food intake back to two meals a day in a quest to put on some weight. I had gone from 72kg in 2015 to 90kg in 2016 to 65kg in 2018 and my target has always been 70kg. However, with all the eating that I was doing, I just wasn’t putting on weight. I was getting worried because I was making a conscious effort to do so, yet it wasn’t happening. Was I sick? The thing is, I’m an over-thinker and I always think the worst. I had to come to terms with the fact that I’m not sick, but my body has found its comfort place and I know that, because I am comfortable. No matter what anyone said, whether I was or still am being told to put on weight, I am in a place of comfort that I’ve been desperately searching for since 2016. So yes, bad situations over the past few years have heavily influenced my weight loss, but the greatest influence was a change in mindset. Even with the huge drop between the end of 2017 and the start of this year, I was still able to consciously search for comfort and find it.

My next step is to overcome my fear and get back in the gym. It’s time for me to maintain my body and focus on helping myself. I’ve decided to join a gym and get a personal trainer and fall in love with exercise again. It hasn’t been an easy journey but it’s been a necessary one, even with the bad influence on my weight loss. A balance of good and bad led to today’s outcome and I’m not complaining. Renewing my mindset to keep my head up and have the discipline to watch my diet was certainly the hardest part and it pains me to know that that wasn’t complimented by healthy weight loss but by a severe state of depression. The good news is that I am aware and I am also falling more and more in love with myself day by day. So no, I am not on drugs, nor am I starving myself. Yes, I have been through periods in my life in which I started starving myself, but I was always able to pick myself up again and that’s the most important thing. Everyone loses weight differently, Nigeria has also certainly DEALT with me over the past year and stress has had a huge influence but my body has still found it’s comfort zone.

I don’t plan on losing more weight, but I do plan on obtaining my current weight of 65kg. I do also plan on obtaining my healthy lifestyle and sticking to my current schedule of two meals a day. Yes, we’re told to eat three times a day, but I also know my body and what my body needs. Comfort is the most important thing and I want to feel comfortable at all times so I am making it my duty to cherish my body. If I put on weight, I’ll embrace it wholesomely and if I lose weight, I’ll embrace it wholesomely. If I leave my comfort zone, I will get it back. Fact is, I’m satisfied and that’s my story.